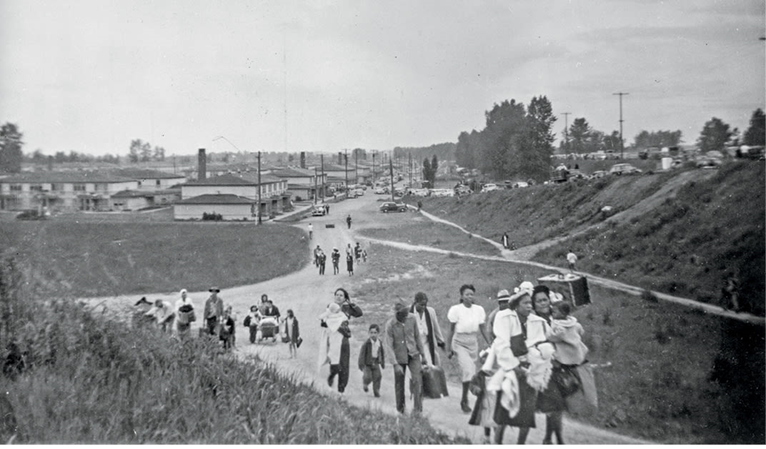 The transcontinental railroad brought an influx of Black railroad employees to Oregon in the 1880s. The Albina neighborhood was a company town owned by the Union Pacific Railroad before its annexation to Portland in 1891 and was located within walking distance of Old Town. Oregon’s Black population at the turn of the 20th Century was 1,105, with 70 percent of that population in Portland and few Black-owned businesses.

In 1906, W.D. Allen opened the 100-room Golden West Hotel, which was meant to serve Black railway employees who were denied access to white-owned hotels. It soon became the center of a thriving, Black-owned business district in Northwest Portland, which included cafes and barbershops. The Golden West Hotel was also a beacon of Black culture in Portland, hosting the likes of Freddie Keppard’s Original Creole Orchestra jazz band in 1914, and civil rights activist A. Philip Randolph.

As a result of the Great Depression, the Golden West Hotel shut its doors in 1931. After changing ownership – and names – several times over the decades, the Golden West has now been restored and is operated by Central City Concern as a low-income housing project.

Recently, the City of Portland nominated the Golden West Hotel for inclusion on the national register due to its significance to Portland’s Black History.

An extension of the larger society, structural racism was embedded in the culture of the 20th Century railway industry in Oregon. In response to the discriminatory treatment of Black Pullman porters, activists A. Philip Randolph and Milton P. Webster led the Brotherhood of Sleeping Car Porters, a labor union organized by Black employees of the Pullman Company. Although the organization played a role in the rise of protest politics in Black America and was significant to 20th Century labor and civil rights history, many Black leaders did not trust labor unions and even viewed railway magnate George Pullman as an ally of the Black community for supplying relatively high-income jobs to Black employees

One high profile case of racial profiling in the railway industry occurred in 1945 when Robert Folkes, a Black Southern Pacific Railroad employee, was falsely accused of murder.

The most likely suspect, train passenger and U.S. Marine Harold Wilson, who had reportedly been acting suspiciously, with bloody hands, claimed that a “dark” man had fled the scene moments before. While working as a cook on the train, Folkes was interrogated and beaten by Southern Pacific detectives and coerced into a false confession. When the case went to trial, despite support from groups like the Portland NAACP, Folkes was convicted and became the second Black man executed by the State of Oregon.

When the Kaiser Shipyards opened on Swan Island and in Vancouver in 1941 to meet the demand for ships during WWII, workers were recruited from all over the country. Henry Kaiser did not limit his workforce to white men, so a housing project developed for shipyard workers in neighboring Vanport made it the most racially diverse city in Oregon.

Vanport was unique in that it was one of only two integrated public housing projects built at that time, the other one being Guild’s Lake. It was the second largest city in Oregon and the largest public housing project in the nation. It was also a relatively integrated community in a very segregated state. Over 40,000 people lived and worked in Vanport — a “Masterpiece of Urban Planning” and the largest wartime development in the nation — including 16,000 Black residents.

In comparison, the Black population in Portland went from 2,000 to 20,000 during WWII. Frequented by Black railway and WWII era shipyard workers, North Williams Avenue in Portland was a bastion of jazz clubs and Black nightlife that even drew people from surrounding states.

Opened in 1945, The Dude Ranch located on N. Broadway St, was Portland’s premier jazz club of the time. Decorated with murals of Black cowboys, waitresses wearing cowgirl outfits with holsters holding cardboard pistols, and a mirrored dance floor, it offered a unique experience for clubgoers of all different backgrounds. However, due to the mixing of races on the dance floor, city authorities closed The Dude Ranch after just one year of operation.

After the war ended, many members of the Black population decided to stay in Oregon despite pressure from civic leaders calling for them to leave. When the Vanport Flood hit in 1948, and the Columbia River flooded Vanport, about one-third of the 18,500 people left homeless were Black.

In response to the needs of those who were displaced from Vanport, members of the Black community in Portland began an organized campaign to persuade the city to address racism in housing and employment on an institutional level. This direct action set the stage for the passing of the Oregon Civil Rights Bill of 1953 that outlawed discrimination in public places.