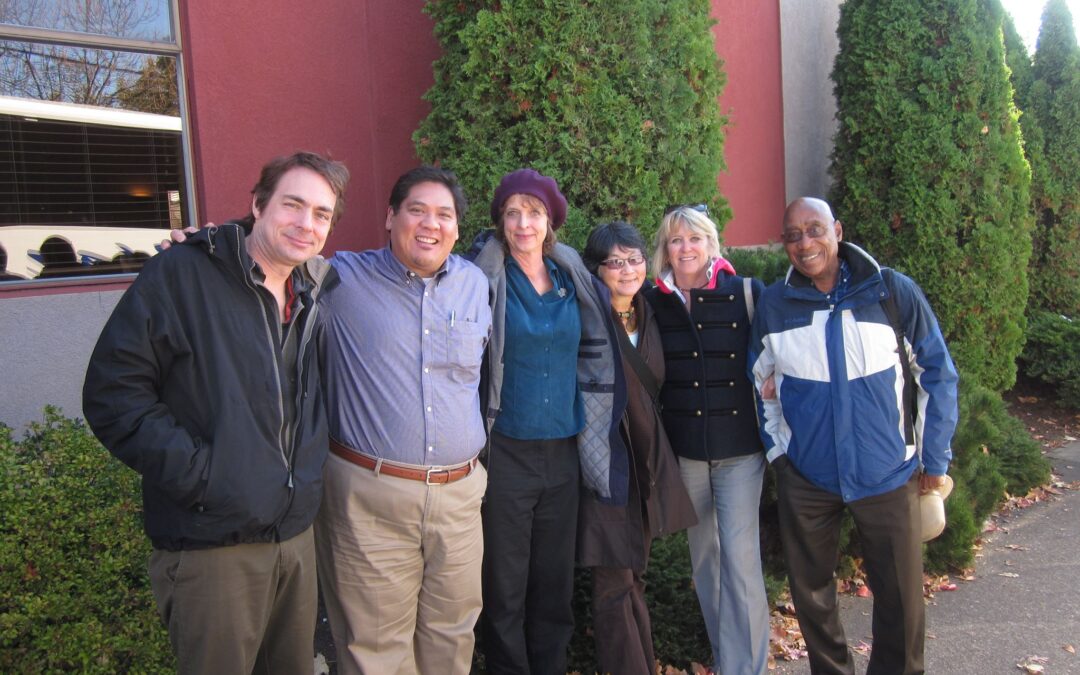 Diane Hess, who developed the historic bus tour in 2008 to commemorate the 40th anniversary of the Fair Housing Act, retired at the end of September. She joined FHCO in 2001 as the Education & Outreach Director and served in that position until 2018 when she transitioned to a part-time Education & Outreach Specialist. Diane shares how she created the tour as a one-time event, how it has expanded since then, and her hopes for the future.

I started focusing on the historical context of fair housing when I began to work as an educator at FHCO. I wanted to get beyond: “these are the laws”, “these are your rights”, “these are the rules you must follow”. I wanted to convey the context of why civil rights in housing exist and why they are so important. I thought this would be especially valuable in training housing providers, but also advocates and, ideally, the broader community.

My first effort was collaborating with a museum exhibit designer to create a traveling display that covered some of this history. Then I started thinking about the power of place-there is something about being physically present at a site where history happened that can have a much deeper impact than reading an article or watching a film. I did a lot of reading and research, much of it at the Oregon Historical Society Library, and interviewed many individuals who were generous with their time. Dr. Darrell Millner, who was the Chair of the Black Studies Department at PSU, connected me with Ed Washington, who had grown up in Vanport. Cynthia Ingebretson, a former FHCO Executive Director, introduced me to Valerie Otani, the public artist who had designed The Voices of Remembrance art installation at the Portland Expo Center, commemorating the incarceration of Japanese Americans there during World War II. Ms. Otani had had family members incarcerated during the war.

Next, I worked on identifying priority content-I wanted to focus not narrowly on housing discrimination, but to bring in related issues to present a broader history.  The next challenge was developing the tour route. A couple of colleagues helped me with this-we drove many routes and timed them. Back in 2008 we didn’t use GPS, just Thomas Guide maps.

The tour was ready in time to commemorate the 40th anniversary of the Fair Housing Act in April 2008. We had four buses. There was a luncheon program after the tour for our 200+ guests. The event was a huge success and we immediately started hearing from passengers who wanted to arrange tours for their organizations.

Even though we did minimal marketing of the tour, we received more and more requests for tours. Our original presenters, Ed Washington and Valerie Otani, had volunteered for a one-time event, but they graciously continued to present on the tours year after year. We added a third presenter, sociologist Randy Blazak, who addressed Portland’s history of hate crimes.

Over the last twelve years we’ve taken hundreds of groups on the tour. Thousands of people have learned about this history and have heard first-hand stories from those who lived it. The first groups were housing providers, governments, and social service agencies. That expended to include businesses, health care providers, congregations, educators, law firms, labor unions, activist groups, and many others.

Originally, I was the only tour guide, but to meet the demand, other FHCO staff joined in. We now have four tour guides. We are also increasing our guest presenters who have personal stories to share. In addition to Ed Washington, we also have Bea Gilmore who shares her experience growing up in Vanport. George Nakata and Marleen Wallingford present their stories of the incarceration of Japanese Americans at the Expo Center. Sadly, our original Expo Center presenter, Valerie Otani, passed away last year. We miss her greatly.

The original tour was 2.5 hours. Over time it has expanded to a full four hours as we’ve added time for our presenters to share their stories and added content as new history has unfolded. For example, after the tragic murders on the Portland MAX train in 2017, we added a stop at the memorial at the station. Our tour route has improved as well, thanks to the efforts of our Blue Star Transportation driver, Randy Crawford, and our expert navigator, Sally Leisure.

We have also continued to work on our post-tour dialogues, which continue to evolve, especially now with the broader community conversation taking place about race. Our hope is that we will be able expand our discussion to focus on ways individuals and organizations taking the tour can become involved in furthering fair housing and broader civil rights efforts in the community.

I hope to see the bus tour continue to evolve, and hope FHCO will be able to increase capacity to meet frequent requests from groups. We have discussed creating a virtual bus tour that we can offer to Oregonians throughout the state, and I am looking forward to seeing that effort take shape. While I won’t be on the staff at FHCO any longer, perhaps I will take an occasional turn as a tour guide in the future. 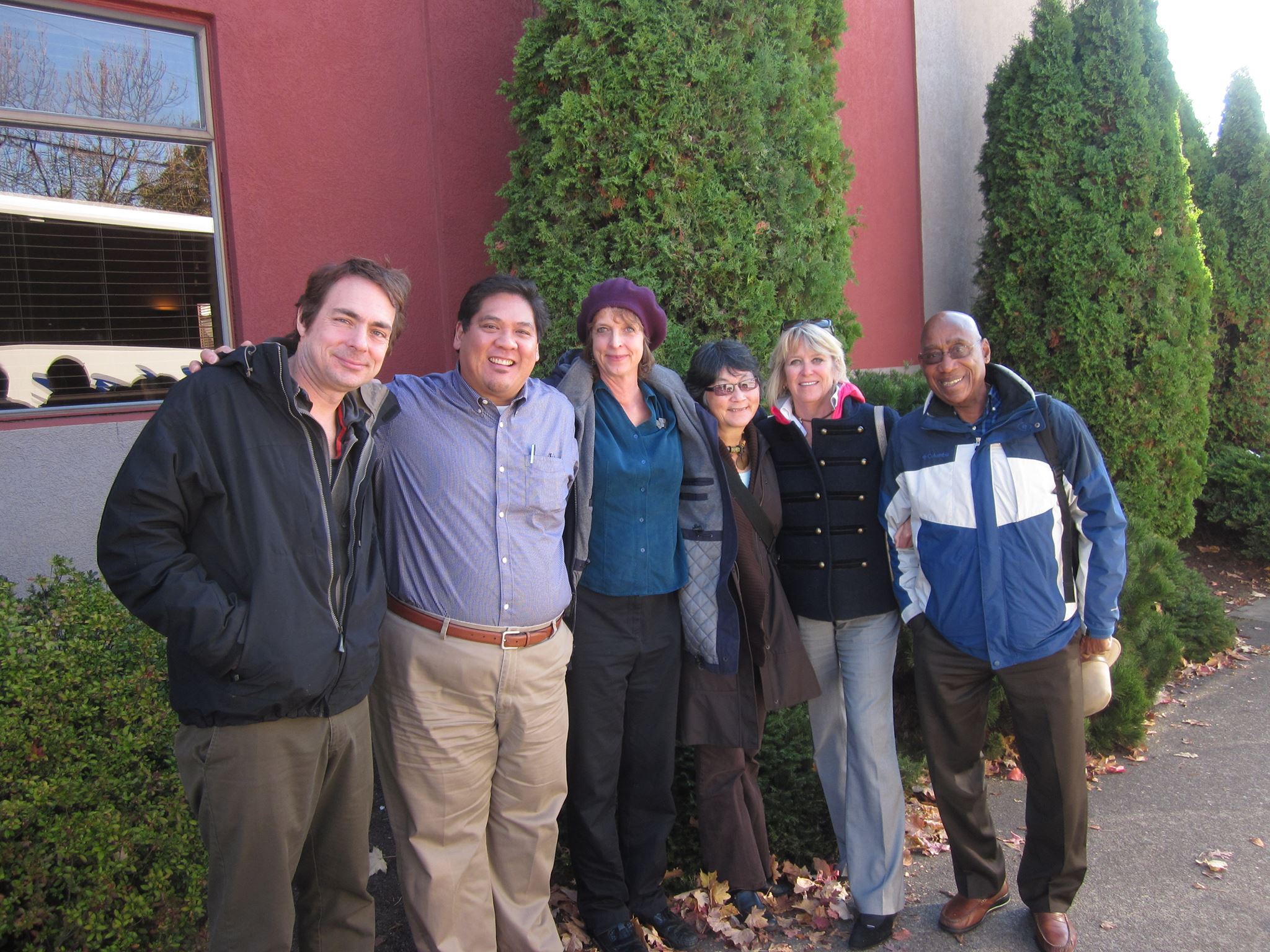